Are you planning a trip to Bhutan in March? Read on to learn more about March weather in Bhutan, clothes to wear for the weather, and best places to visit in Bhutan in March.

The weather of Bhutan is warm and sunny during the daytime and cool at night, with an average temperature range from 11°C to 22°C. With the start of the warm spring season in most of Bhutan, March is one of the peak months for traveling.

Thimphu: It is mild and sunny in Thimphu in March. The temperature drops to 4°C (39°F) at night on average, and rises to an average high temperature of 19°C (66°F) during daytime. Rainfall is rare in March in Thimphu, with about 3 days of raining.

Paro: It is cold in March in Paro. The low temperature drops to around 0°C (32°F) at night, and the average high temperature is 12°C (53°F). You can expect less than 5 days of rain in Paro in March.

Punakha: It is also cold in Punakha in March. The temperature typically drops to 1°C (34°F) at night, and its daily high temperature reaches around 9°C (49°F). Rainfall is around 66mm falling on about 3 days.

The Best Places to Visit in Bhutan in March

With the beginning of spring and the increasingly warmer weather, March is one of the best months of the year to visit Bhutan. With the sky mostly clear and plants regaining their lush green, more and more travelers come to Bhutan to explore its numerous examples of natural beauty and cultural relics. Here are some of the best places to visit in March.

As the temperature becomes warmer and plants regain their lush green, March is a good time to visit Royal Manas Nature Park. It is one of Bhutan's most visited wildlife parks that is popular with animal specialists and nature lovers. Covering an area of 1057 sq. km (408 sq. mi), the park is well-known for its great biodiversity, which covers numerous endangered wildlife species, including the one-horned rhino, Bengal tiger, clouded leopard, Gangetic dolphin, Himalayan black bear, and many more. If you are lucky enough, you can see the rare golden langurs in the park. It is a popular destination for family travelers with kids.

If you are looking for a place to spend your afternoon time in Paro, then Paro National Museum is a good place to learn more about the history and culture of Bhutan. Located above Paro Dzong in Paro district, the National Museum is not only famous for its large collections, but also for its stunning views and its buildings' unique architecture. Collections at the National Museum include arms, ritual objects, clothes, jewelry, religious articles, scroll paintings, and much more.

There is a saying that ‘it won't be a good trip if you don't visit a dzong in Bhutan'. Dzongs are Bhutan's traditional monastic/administrative fortified buildings. There are numerous dzongs in and around the cities of Bhutan. Punakha Dzong is the most visited one in Punakha prefecture. Located on the confluence of the Pho Chhu and Mo Chhu rivers, Punakha Dzong is the second oldest and largest dzong in Bhutan. This impressive feat of architecture was where Bhutan's kings were crowned. Now, it is used as the government administrative center for the Punakha city area. The dzong complex and its majestic structures are a popular spot for photographers.

Buddhism is the main religion in Bhutan, which plays an important role in Bhutanese life. If you are interested in the Buddhist culture of Bhutan, the Buddha Dordenma in Thimphu should be on your list. Located at the southern entrance to the valley of Thimphu, the 52-meter (169-foot) -tall Buddha statue is an amazing work of art, attracting many photographers from all over the world. It is said that there are 125,000 smaller Buddha statues inside the big statue. Buddha Dordenma was constructed in 2015 to commemorate the 60th birthday of the fourth king of Bhutan (r. 1972–2006). It has become a popular attraction in Thimphu.

March is a good month to explore the natural beauty of Paro, as the mountain plants regain their lush green thanks to meltwaters and a slight increase in rain. Chele La high mountain pass is a place to relax your eyes and have an adventure surrounded by nature. One of the popular activities is to ride a motorcycle up to the pass at a height of almost 4,000 meters (13,000 feet) above sea level. It is a great road trip, as you can take in picturesque views on both sides. From the top of the mountain, you can have a panoramic view of the snow-capped mountain peaks, which is a highlight on many a trip to Paro.

Crowding and Costs in March

March is the beginning month of peak tourism season in Bhutan (March to May). More and more tourists come from March. Because of the tourist number limit set by government, crowding will not be a great problem during your trip in Bhutan. You won't have to stand in long lines for attractions. Tours and hotel prices increase in March as the peak season comes into effect by late March. It is a good idea to book your flights as early as possible if you decide to visit Bhutan in March.

What to Bring/Wear in March

It is mild/cool in the day and cold in the mornings/evenings in Bhutan in March. Pack warm clothes — sweaters, "windproof" trousers, jeans, coats... — with some lighter (walking) trousers and a light jacket to change into according to temperature changes. There will be about 5–10 days with rain in March. It is recommended to take an umbrella or waterproof jacket to cope with wet days.

If you want to explore Bhutan and experience its many delights, get in touch with us. We can help you navigate Bhutan's changing seasons and assist you in picking the perfect time to visit its top attractions.With Asia Highlights, you enjoy no-risk booking, 100% refund policy! (up to 14 days before departure) 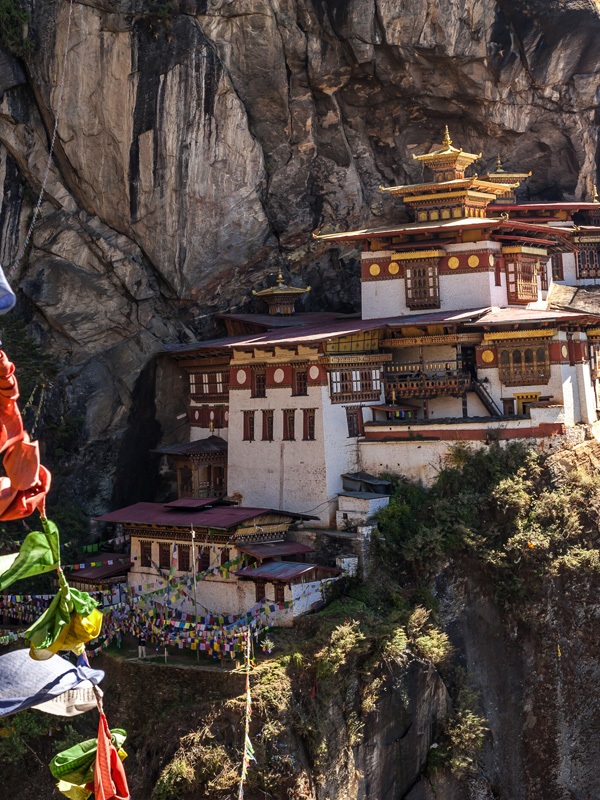 12-Day India and Bhutan Tour100% refund policy! (up to 14 days before departure)
Create my trip