The long and complex history of Thailand has left many monuments and places of historical interest all over the country.

From the many temples built in Bangkok during the Chakri dynasty to the amazing historical parks of Ayutthaya and Sukhothai, to the Lan Na architecture to be found in Chiang Mai and Chiang Rai, to the World War II sites at Kanchanaburi, the historical places in Thailand span a period of 1,500 years, giving every history-lover more than one reason to visit the country.

The capital city is full of temples mostly built in the 18th century by Rama I, the first king of the Chakri dynasty, the dynasty that still rules Thailand.

The Grand Palace is a great example of the splendor and power of the dynasty and Wat Pho hosts an enormous reclining gold Buddha. Finally, the 80-meter-tall tower of Wat Arun surveys the city, reflecting in the waters of the Chao Phraya River.

The magnificent Grand Palace complex was built in 1782. The grandeur and diversity of its architectural styles make this site a must-see for every traveler in Thailand.

Its most famous and most sacred building is Wat Phra Kaew, the “Temple of the Emerald Buddha”. The Buddha image in the temple is 2,000 years old. The walls are covered with paintings depicting important events in Buddha’s life.

Finally, the Royal Monastery is really worth a visit, with its stunning paintings depicting the Ramakien, the Thai version of the epic Indian tale Ramayana. The paintings depict battles between good and evil, and were first painted in the 18th century, when the whole complex was built.

The “Temple of the Reclining Buddha” is one of the most-visited temples in Bangkok. The large complex, built in 1782 by Rama I, hosts more than 1,000 Buddha images. Many come from abandoned temples in Ayutthaya and Sukhothai.

The most peculiar of these images is a 46-meter-long gold-plated Reclining Buddha, built in 1832 by Rama III. The statue depicts the Buddha as he passes into final Nirvana after dying. The soles of the statue’s feet are 3 meters long and are decorated with 108 mother pearls.

Wat Pho is also famous for being a center of study, especially study of Thai medicine. According to legend, this temple is the birthplace of Thai massage.

The main feature of this temple is the huge tower (prang) reflected in the Chao Phraya River. The tower, 80 meters tall, is the tallest in Thailand, and has dominated the skyline of the city since its construction in 1782.

The prang, built in Khmer style, is decorated with millions of small pieces of Chinese porcelain. When it is lit at night, it shines brightly on the river.

You can climb the tower via the stairwell inside. Though it is not possible to reach the very top of the prang, you will still get a stunning view of the city.

Ayutthaya was once the capital of the eponymous kingdom that ruled Thailand from 1351 to 1767. Back in that time, it was the most prosperous city in all of Southeast Asia. What now remains of its former splendor can be seen in the historical park outside the modern city with the same name.

Wat Thammikarat, dating back to the 12th century, is maybe the oldest temple of the complex, older than the city itself. The assembly hall (viharn) is still intact, and hosts a bronze Buddha image. The chedi (the most sacred part of a Buddhist temple) is surrounded by 52 guardian singhs, mythical animals resembling lions.

Viharn Phra Mongkol Bophit took its name from a huge bronze Buddha statue within its walls. The temple was built during the 17th century and, after being seriously damaged, was reconstructed during the last century.

Wat Phra Ram (“the Temple of Rama”) was founded in the 14th century. The four smaller towers surrounding the main chedi were built in the 17th century. The central one is decorated with sculptures of Garuda, a bird god from Hindu mythology. Around the temples, there are several small lakes and a small park.

There are three royal palaces in the park. The Grand Palace was the king’s residence, and consists of many buildings, such as a royal hall for ceremonies, and private living quarters for the royal family. The palace was destroyed in 1767 by the Burmese empire, and today only the foundations and part of the wall are to be seen.

Chandra Kasem Palace (“Front Palace”) was the royal residence of the prince. It dates back to 1577, and consists of a group of buildings in Thai style. The observatory tower was built during the 17th century, and today is a museum with artifacts from the Ayutthaya period.

Wang Lang (the “Rear Palace”) was the residence of the sons of King Maha Thammarachathirat (1506-1569). Different living quarters of the royal family were added later.

Location: the park is 80 kms north of Bangkok, on an island in the town of Ayutthaya.

The historical park in Sukhothai encompasses the ruins of the old city, once capital of the Sukhothai Kingdom, founded in 1238.

The park, with lakes, pond, and trees, hosts many well-preserved monuments dating as far back as the 13th century. The monuments and temples are built in Sukhothai style, which is a combination of Khmer and Singhalese styles.

The largest temple in the park is Wat Mahathat, the “Temple of the Great Relic”. It was built during the 13th century, and has structures in many different architectural styles. Most of what we know about the history of Sukhothai comes from the Ramkhamhaeng stele found in this temple.

The main chedi, built to enshrine relics of the Buddha, is topped with a finial shaped as a lotus bud, a shape peculiar to the Sukhothai style. It is adorned with 168 sculptures of monks, and the many niches contain many Buddha statues.

What remains of the main assembly hall are some pillars and the base. At the center of the viharn is placed a bronze seated image of Buddha, known as “calling the Earth to witness”.

This temple, the oldest in the park (late 12th century), consists of three Khmer prangs and two viharns. It was founded as a Hindu sanctuary dedicated to Shiva, and was later converted into a Buddhist temple.

The most important feature of the temple is its three Khmer-style prangs. The prangs are covered with stucco carvings depicting mythological beings, and surrounded by a gallery. They were left unfinished during the 12th century and finished in Lopburi style three centuries later.

This temple is famous for its mondop (a square-based building with a pyramidal roof) with a large statue of Buddha visible from outside. The statue, the biggest in the park, is 15 meters tall and 11 meters wide. It has a serene facial expression, typical of the Sukhothai style.

Location: The park is in Sukhothai province, about 430 kms north of Bangkok, 10 kms west of the modern city of Sukhothai.

The historical sites in Kanchanaburi all date back to World War II. The best-known of them is the Bridge on the River Kwai, part of the Thai-Burmese Railway, built by war prisoners under the guidance of Japanese troops. Nowadays, some sections from the original bridge are still in use.

Another important part of the railway is Hellfire Pass, a 500-meter portion of rock dug out by hand by 1,000 prisoners. Seven hundred men died during construction of the pass, and its nickname comes from the lanterns used by prisoners at night. Close to the pass there is a Memorial Museum to honor the victims.

Finally, the JEATH War Museum will give you a glimpse of the prisoner camp built near the city, with original bunks, photographs, and other authentic items.

Location: the town of Kanchanaburi is about 130 km west of Bangkok.

Chiang Mai, about 700 kms north of Bangkok, was once the capital of the Lan Na kingdom, and today is one of the most famous tourist destinations in all Thailand.

One special feature of Chiang Mai is the many temples that can be found in and outside the city. The temples are examples of Lan Na architecture, and are some of the finest examples you’ll find across the country.

This historical site contains the ruins of a 13th-century citadel surrounded by moats. Some of the temples inside the site are still in use today, and there are a total of 42 ancient monuments.

The town was founded in 1286, and for 10 years was the capital of the Lan Na Empire. During the 16th century, a nearby river changed course and flooded the entire town.

One of the oldest monuments is Wat Chedi Liam, founded in 1288 and famous for its stepped pyramid chedi. Wat Chang Kam, built two years later, presents a chedi with elephants protruding out of the base. The niches inside the chedi present many Buddha images.

This temple was built in the 7th century, and its most unusual feature is a 17-meter-high Buddha statue. The enormous statue of the Buddha sits on a white base, with numerous smaller Buddha statues in front.

The chedi, the oldest structure, was built in 687. The stairs are guarded on both sides by huge Naga serpent statues, and the chedi hosts a sacred relic of the Buddha. The courtyard surrounding the chedi has plenty of gongs and bells visitors can strike.

The ubosot, the ordination hall, has a gorgeous façade, adorned with a golden peacock on a lively green background, placed over the main door.

Chiang Rai, along with Chiang Mai, offers many examples of Lan Na architecture, and is mostly famous for its many temples.

Here, in 1434, the Emerald Buddha was discovered. This is the most sacred Buddha image in all Thailand, now preserved in Bangkok.

The Emerald Buddha was created in India 2,000 years ago, and moved all around Southeast Asia. It was discovered only after a long time, in the aftermath of a storm.

The facade of the main viharn is adorned with decorated panels, and the smaller viharn has a multi-tiered roof. The main door is guarded by two Naga snakes, a characteristic of Lan Na architecture.

No one wants to miss any of the marvelous historical sites across Thailand. Asia Highlights can help you craft the perfect itinerary, to enable you to explore the rich historical sites the country has to offer.

Our knowledgeable staff will assist you when choosing your destinations and will provide precious assistance throughout your trip. 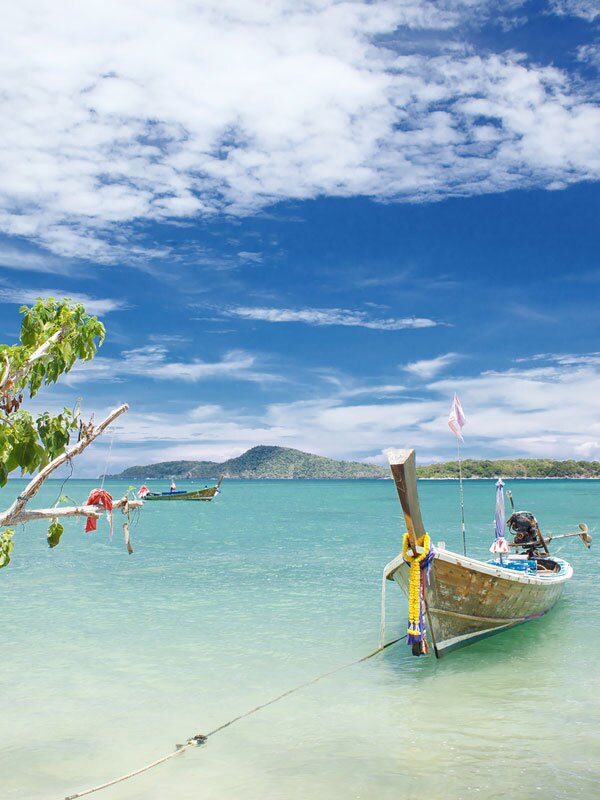